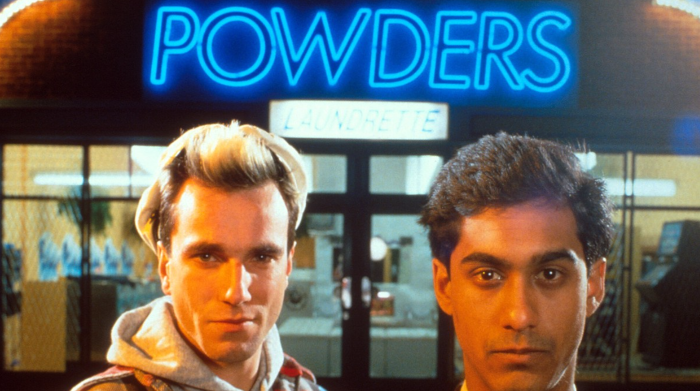 Iconic, Lambeth-made 1980s classic ‘My Beautiful Laundrette’ gets a rainbow plaque in Vauxhall commemorating the film and its important local LGBTQ+ history.

The plaque will mark the location that became fictional laundrette “Powders” in the iconic 1985 film and will be found on a site in the footway opposite no. 11 Wilcox Road, Nine Elms, SW8.

The film broke major ground in the Thatcher era with an interracial gay love story, it earned Hanif Kureishi an Oscar nomination for Best Screenplay, made Daniel Day-Lewis’ a star and helped establish Film on Four. In 1999 The British Film Institute ranked My Beautiful Laundrette the 20th century’s 50th greatest British film.

Wandsworth LGBT+ Forum made a successful planning application for the site to celebrate and preserve London’s LGBTQ+ cultural history. “People already come to see the Powders site” says David Robson of campaigners Wandsworth LGBT+ forum. “We hope it will become a visitor attraction, inspiring people to come and stay for a coffee or to eat and support local businesses.”

Screenwriter Hanif Kureishi said: “Everyone who worked on My Beautiful Laundrette is thrilled and delighted to be associated with the Rainbow Plaque, which not only celebrates us but the whole of the LGBTQ community and their work for freedom in these difficult times”.

The plaque design was based on the Rainbow Plaque scheme established by York Civic Trust with York LGBT Forum in 2018 as a way to identify vital people and moments in Queer History.

Leader of Lambeth Council, Cllr Claire Holland added: “I’ve supported this community-led campaign in my ward from the beginning. I went on a site visit with David Robson to talk to shopkeepers and talk about where to install the plaque, and I put Wandsworth LGBT+ Forum in contact with the team from Lambeth Highways who will project-manage the installation.”

This website uses cookies to improve your experience while you navigate through the website. Out of these, the cookies that are categorized as necessary are stored on your browser as they are essential for the working of basic functionalities of the website. We also use third-party cookies that help us analyze and understand how you use this website. These cookies will be stored in your browser only with your consent. You also have the option to opt-out of these cookies. But opting out of some of these cookies may affect your browsing experience.
Necessary Always Enabled
Necessary cookies are absolutely essential for the website to function properly. This category only includes cookies that ensures basic functionalities and security features of the website. These cookies do not store any personal information.
Non-necessary
Any cookies that may not be particularly necessary for the website to function and is used specifically to collect user personal data via analytics, ads, other embedded contents are termed as non-necessary cookies. It is mandatory to procure user consent prior to running these cookies on your website.
SAVE & ACCEPT